Modern Tech at The Engine Room

There are so many pretty things happening in Second Life at the moment, the changing of the colours is taking place and people are slowly starting to wear warmer, cosy looking clothing. There are costumes being planned and things are starting to get a little spooky. I LOVE this time of year...
There are other things happening that have to be shared though before the spooky things start. The Engine Room has opened and there's so many gorgeous, steampunkish things filling the grid, Yet you know me, there are ways to make things fit every style, for my first peek into the Engine Room I went a little wild... 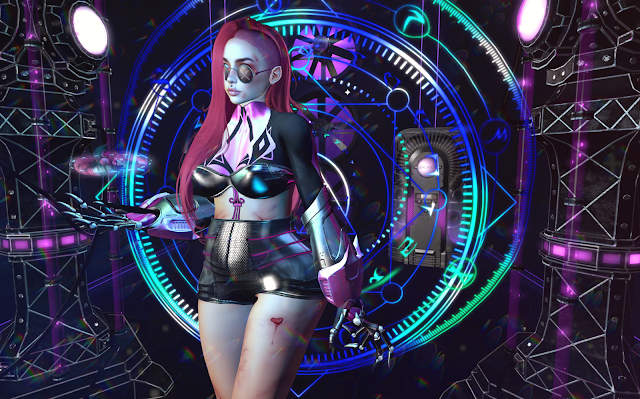 Out the back of The Engine Room, you might find the Workshop - a backdrop from FOXCITY - Rudh wrapped herself in a protection with a Nox Arcana - a halo from Quills & Curiosities - to slip between the somewhat dangerous Power Cell Pillars - from Oblivis at The Engine Room - to steal the universal heart, or the "Left my heart in..." - from Doe at Dollholic - that has been stored in the Murder Juke Audio Jukebox...
I know that her outfit, and in fact this entire picture, isn't really very steampunk in style but I had to get a little high-tech Manticore Mecha Arms - from Elivah - which caused me to get more than a little high tech in style...

Posted by Rudhmellowen at 8:55 PM