A Dark Adventure at Ghost School

It's OCTOBER!!! Finally the spooky season has started and I'm SO EXCITED!!! There is so much going on this month, and I plan on harming my psyche with 31 different costumes in 31 days!!! I LOVE the spooky season!! It's the best and most wonderful time of the year...
I also have some of the most amazing news... Our very special, spooky event, a DARK ADVENTURE for 2022 has FINALLY opened!! We're going on a tour of the world and hope that you'll come with us!!!
Welcome to the Ghost School, and I'm sure this month you'll meet some of the spookies that will be haunting the place... First a trip into the School Gymnasium... 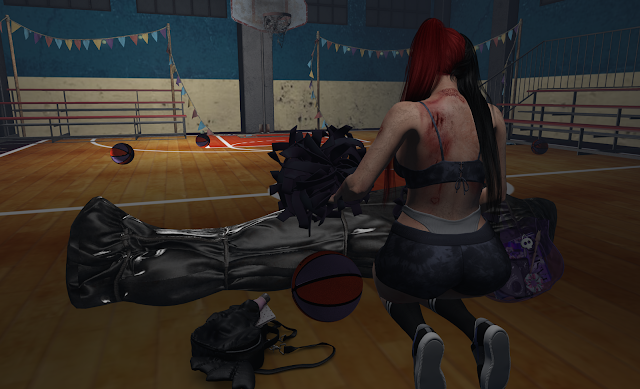 There's spooky things going on at the Ghost School... Monsters are coming in and going out, a ballgame took place and the head of the cheer squad is disposing of the losing team's captain. Her uniform is a new style in the Anna range - a set released by miss chelsea for the Belleza Event - it makes her school colours, and looks AWESOME!!!
Maybe you'll bump into the head cheerleader at Ghost School!! Come find out on your own Dark Adventure!

Posted by Rudhmellowen at 10:43 PM No comments:

The Blood Moon lures in the Vamps...

As the spooky month draws ever closer, we have just a few days and the season officially starts, and I CANNOT wait. They say that Christmas is the most wonderful time of the year, but I beg to differ, I believe that they got confused, it's clearly Halloween first then Christmas...
The monster in me cannot wait until it starts and she's busy getting herself prepped for the events that will soon be unfolding. The moon is also getting ready for the fun, it's painting itself red and to lure out the blood-thirsty vamps... 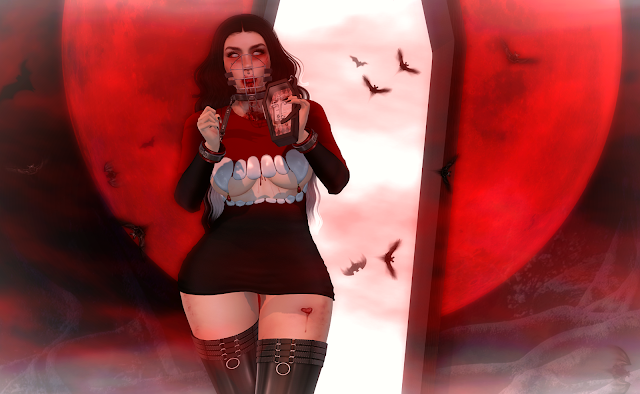 The moon turning a blood red seems to be a sign to lure these vamps out of their Final Rest - a backdrop from FOXCITY - and even though she's restrained, bound in cuffs and wearing a muzzle, she is dressed to celebrate the Spooky Season. She's all dressed up wearing with the most amazing of Vamp Dress clubwear - from Neverwish, available at Salem - and accessorised herself with the cutest of Coffin Pochette purses - from Boutique #187 at Planet29 - and her faithful swarm of Bats that became something of a Bats Aura - from Moon Rabbit at Salem - all she needed now, before the festivities of the party season was something delicious to sate her appetite, perhaps a little SickLove...

Posted by Rudhmellowen at 9:04 PM No comments:

A Goddess of Tempestuous Waters

It's ABSOLUTELY pouring here, and everything has cooled down so much because of the rain.
Though there is magic in the world and there should be something magical about the water, it's life bringing, it's healing, and it's one of the most important things in the world. Sometimes I wonder if we don't treasure it enough... There are others that feel we are not... There is an Engine Room member that has been watching our useage of the water we abuse, and she is not amused, the Goddess of Water is more than a little frustrated... 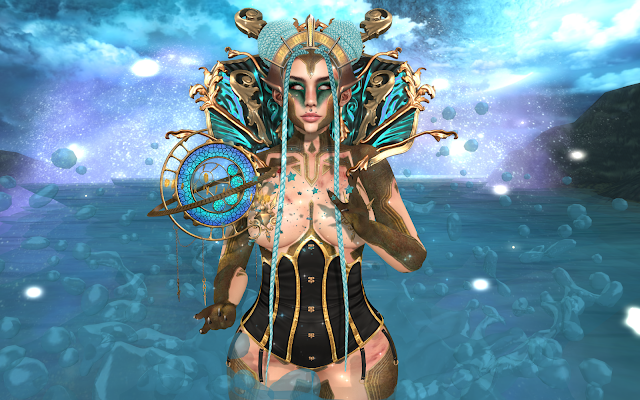 Her anger has made the waters a little tempestuous - like the background from Synnergy.Tavis - and the darker side of her style came out with a vengence, boiling and splashing the water around her... Since she's a goddess with connections to the Engine Room, she's a little more steampunk than some of her counterparts. Her skin is etched with METROPOLIS markings - from Fallen Gods Inc - and she's wrapped in an Allusa Corset - from ASH - while her Vanity Hair is adorned with the Evil Baby, Athalia's Crown. The magic slipping from her fingertips, controlling her Chronomancer's Astrolabe - from Quills & Curiosities at the Engine Room - to control the movements of the water around her...

Posted by Rudhmellowen at 9:14 PM No comments:

A Train to Run Away on!

I have a really big desire and muchly desperate need to go home to the UK... I want to be with my mum for a while, I want to get a tour of my dad's garden like he does everytime I visit and I want to finally go to see the house that my little sister has moved to and has started to live in like a grown up. There has been so much chaos in my RL lately that I feel the strongest need to run away, and although that cannot be happening for a while just yet, I can't help but let myself dream about it... I'd love to jump on a train in Amsterdam Central and get to London asap... 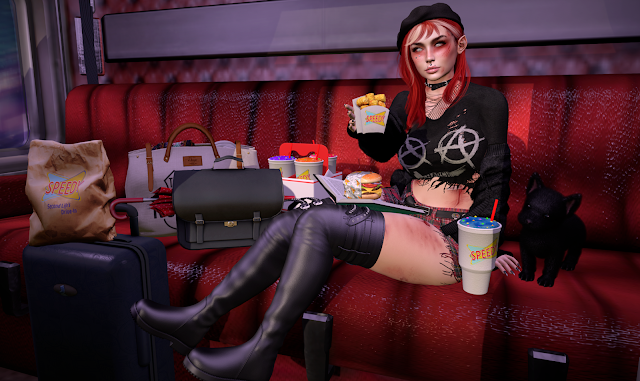 After a long day at work, I'd like to board the Night Train - a backdrop from Synnergy.Tavis - after having lugged my luggage into work and back to the station. I found a quiet compartment and curled up for the long trip with a good book on my lap and some of the very naughty Speedy's Fast Food Junk Food that you can get at the station, these slushies are totally delicious and I couldn't pick one flavour so I got them all... It's going to be a long trip like I said... Then whilst I was sitting there, a cute little Terrier Puppy - from SEmotion Libellune - appeared in my compartment, he seemed to want to share my dinner and he seemed very pleased when I slipped him a hotdog! It was nice to have a companion to talk to!

Posted by Rudhmellowen at 8:25 PM No comments:

There is a rumour going around that something totally top secret is stored within one of the many sub-chambers of the Engine Room... It's so secret that even the rooms creators have no idea exactly what may be stored inside. It's definitely something that is super important though since they have now posted their own brand of armed guards, posted at the gates to the grounds... 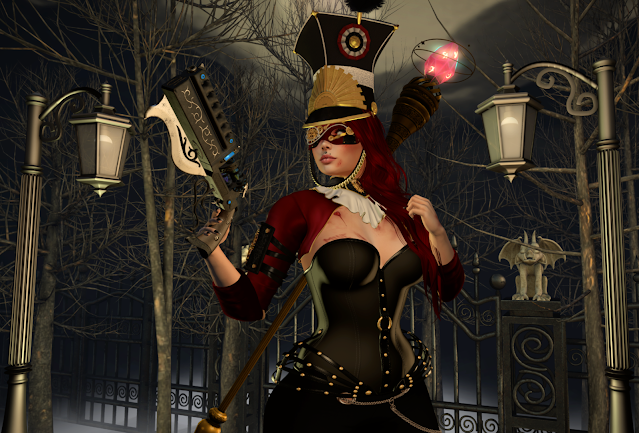 Rudh has been posted as a guard on the northern end of the estate, where the Darkness - a backdrop from IDK Poses - is thick and foggy, puts the senses right on edge... The uniform of these guards is gorgeous but definitely not warm enough for this kind of weather. The Guinevere Jacket - part of the Luas outfit, along with the mask worn in this look - and the Viktoria Corset with this extra caging - available from sixx x wraith at the Engine Room - really doesn't keep you all that warm, althoug it's so chic looking. It looks even better when the St. Czapka Cap - from Grasshopper - is added to the top!
These guards may not be very warmly dressed, but they are very well armed... The Aether Stream Pistol - a weapon from Artemisia - is a brutal pistoal charged with ionic techology that will obliterate anything that it touches, and if that wasn't enough power, the Magus Rod - from Quills & Curiosities at The Warehouse - will freeze you on the spot the moment that you try to cross a guard...

Posted by Rudhmellowen at 8:40 PM No comments:

Riding on the Shooting Stars

Stars are a map of the universe and have long been relied upon for many things in many different cultures through-out the ages and the cultures. To see a shooting star can mean that change, luck, fertility and love are on their way - depending on which culture you check - but there's nothing out there that says what riding on a shooting star could do for you.
As always, and since I could REALLY use a little change and a lot of luck in my life right now, Rudh is going to play guineapig and test this out... 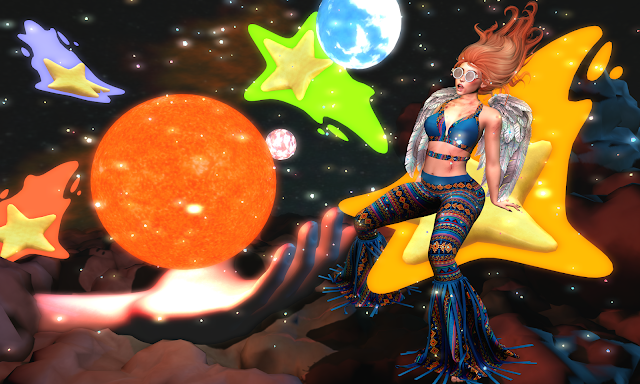 High up in the Stratosphere - a backdrop from The Bearded Guy - so high that if you're lucky you might get to see the hands of the gods, so long as you manage to dodge the shooting stars that zip through the black space. The angels have perfected the art of flying the stars, it couldn't be that hard, really, could it? Wannabe Angel Rudh decided to give it a try. She pulled on a pair of Celestial Shades - from Violetility, which you can also see in the close-up I added below - to protect her eyes from the starry glow, waiting for just the right moment. A star came whizzing past and Rudh jumped on for a Space Ride - an awesome new vehicle from Ananas for Kustom9 - and screamed all the way across the galaxy... 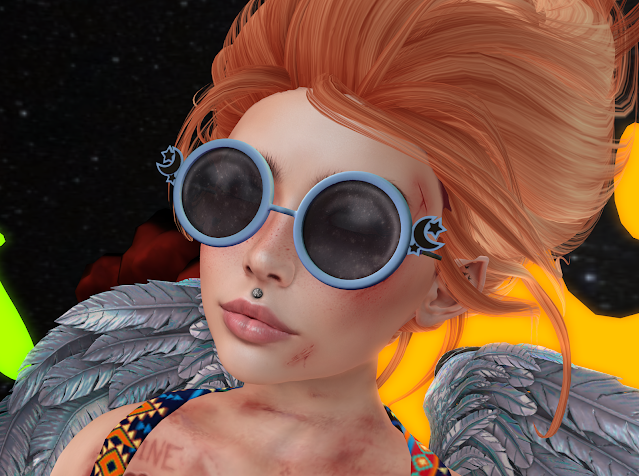 Posted by Rudhmellowen at 9:51 PM No comments:

The Engine Room is just the start of the Adventure!

You may know that I have a guilty pleasure in watching all different kinds of ghost hunting shows, but when I'm watching TV with my other half it can be hard to find something that we both want to see...  Dr Pimple Popper is an addiction, and we're excited about various new series, BUT we both love to watch the show Expedition Unknown with Josh Gates... All the adventures he goes on, and the archaeological aspects excite me, I've always wanted to go on a big adventure, I'd love to see some of the things that he gets to see... I'm going to let the Engine Room be the start of the journey... 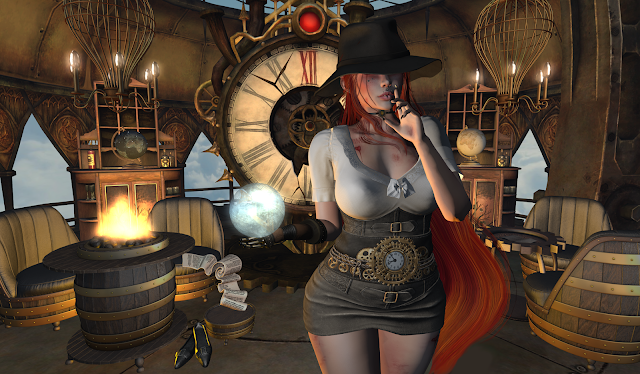 I'm going to plan my journey in the warm luxury of the Clock Station - a backdrop from Synnergy - Lounge where the furniture is made from a gorgeously comfortable Barrel Set - available from Krescendo at ALPHA - and I dressed for the part, a Steampunk styled version of Indiana Jones... Ready to set off on a Steampunk Adventure - in my Art&Ko dress, with my Ministry floppy hat - people tried to warn me that it wouldn't be safe. That handling the Crystal Visions Orb - a pose prop in the full body pose set by piXit - was dangerous, but they didn't realise I'd be wearing my Barclay Hands - from Wicca's Originals - luckily the steampunk prosthetic helps me to grip the orb without threat of it's mystical powers...

Posted by Rudhmellowen at 7:57 PM No comments: