Last night I got very lost in the brilliant blues and pinks of the shooting stars, and as Jupiter once said it was lonely while I was looking for myself out there... It was far too pretty, not to let myself get lost in the stars... Only problem is that I got myself lost so much I ended up in a dark corridor, the only light radiating from the sparkles of my fingertips, magic that I'd picked up while dancing amongst the stars... 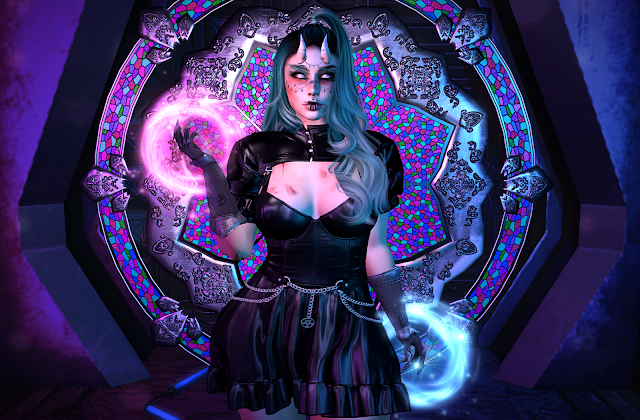 Catching a glimpse of myself in a reflective surface I noticed that the stars had adorned me with the most beautiful of Cathedral Halos - a gorgeous release from Quills & Curiosities at Midnight Order - and as if by magic, I noticed that the most beautiful pair of Static Order Gauntlets had been laid out to protect my hands from the sparkling of the stars...
Luckily I had a change of clothes too, the ones I wore the night before were covered in stardust... This PVC Decoy Dress - it's actually the Midnight Order release called Fiona - isn't truly meant to go with this awesome minuit Shirt but it made the perfect outfit for the little demonness in me to feel brave enough to explore the dark halls, lit only by the neon of my sparkling fingertips...
Since I love this look so much, and since a lot of prettiness is happening on my face I had to take a moment to show a little close up... Get a look at the pretty horns, make-up and face jewellery... Isn't it cute!!!! 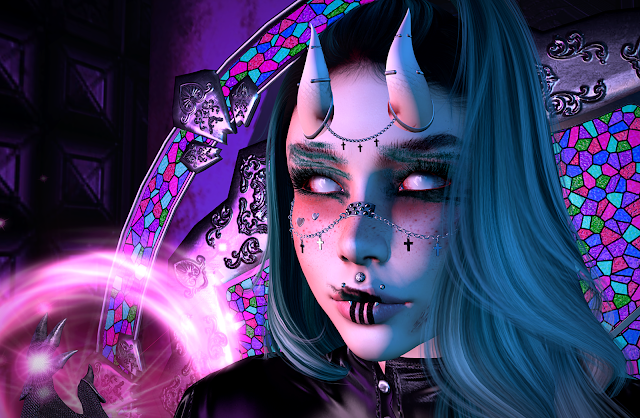 Posted by Rudhmellowen at 7:57 PM