Tis November 5th, and for those of you that have no idea about the significance in British History I think perhaps I should share with you a little poem that I've known since I as at school...

Remember, remember!
The fifth of November,
The Gunpowder treason and plot;
I know of no reason
Why the Gunpowder treason
Should ever be forgot!
The Gunpowder Plot of 1605 was an attempt to blow up the British Houses of Parliament and kill the then King, James I of England. It is always remembered on November 5th with the burning of a Guy Faulkes - the man charged with guarding the gunpowder that was hung for his crimes - doll and a mass of fireworks.
I'm not really keen on fireworks - long story - so today I will remember the plot in a different way, sitting in a graveyard! 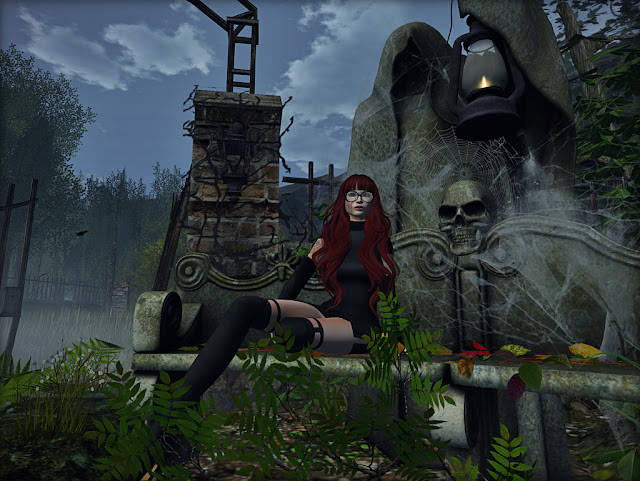 Sometimes graveyards are the best place for remembrance right? I mean they are the last resting places of the dead souls of the bodies buried within. The graveyard at the Woodbury Falls location is very pretty, and a perfect place to remember the dead, even someone like Guy Faulkes deserves to be though of!
Maybe they aren't the best places to discuss fashion, but what the hell I'm going to talk about my outfit while I'm here anyway! A dress complete with gloves - from Dead Dollz - and a pair of CandyDoll boots make up my outfit today. I have a wig styled by the awesome Wasabi Pills - which has become one of my new favourite hairstyles - and a pair of glasses that I can still just about see through and refuse to give up on because they are my Good Old Glasses from Izzie's which you can grab until the end of today at the last day of the Geeks'N'Nerds Fair!
Now, let's have a moment of silence to remember the Guy while I dig around in my hoard to find some sparklers?!