My Military Operation for Shoe Fair!

Shoe Fair is something that tends to be a pretty precarious place for me... I am a shoe addict (though I tend to only ever come back to one pair on a regular basis, which I know is bad), my family say that I am a bit like the SL version of Imelda Marcos as I have around 2000 pairs of shoes... Yet it draws me in, I cannot help it, I hear Shoe Fair calling me "Rudh, Rudh, Come buy some shoes Rudh"... Well this year was gonna be different I had set myself a limit of a maximum of 5 pairs!
I went in and picked up LOTS and LOTS of Demos, before pulling myself away back to our build platform to spend TWO WHOLE HOURS umming and awwing over which ones I wanted... In the end I chose only TWO PAIRS (as I had bought one pair already - it was love at first site)... THREE PAIRS OUT OF THE HUNDRED OR SO DEMOS I GRABBED... Pretty good huh??
Then I needed a set plan to make sure I went to the stores I was buying from and those stores ONLY... So, I having a moment of smartness on my previous visit had snapped a photo of the fair map, and I got out my colouring crayons and started to draw all over it... 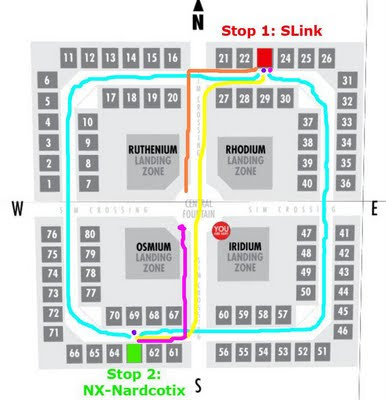 Colour codes were necessary!
Orange was used for my route from the initial landing point to the first store I was heading back to, SLink... From there though I had a long walk following either the Blue or Yellow routes over 2 Sim Crossings, it looked to be a bit laggy walking all that way! Then I thought AH HA, I'll TP from one store to the other using the world map, hence the Purple Dots, but that didn't work either as there was a landing point in the central point near the fountain, and then the Pink route was created a simple TP to the central fountain on the Osmium Sim and then a quick walk around the corner to store 63, NX-Nardcotix.

I love all the shoes I bought, but man the Military-esque precision planning that went into that trip was tiring... I salute you shoe fair vendors and organisers, but now it's time for a nap hehe! 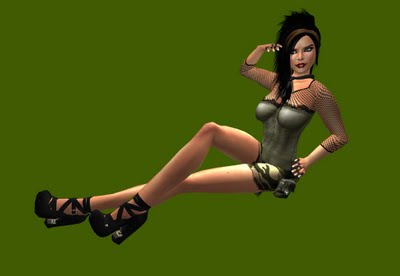 Posted by Rudhmellowen at 7:22 PM