Waiting for the Waltz of the Daemons

It´s beginning to look like Christmas in many different places in SL, but I am at the point of refusing to let that anywhere near me LOL... It´s not even December yet, I´m still loving on October! The colours of Autumn are things I´m not really willing to give up just yet... So for a while, I´m going to be avoiding the subject of Christmas and the fat man in red..
Until then though, there should be the startings of some wintery magic... Today I started preparing myself for the Winter Waltz of the Daemons - the theme for the new round of Aenigma - as the monster in me fought with herself to decide what to wear for a waltz... 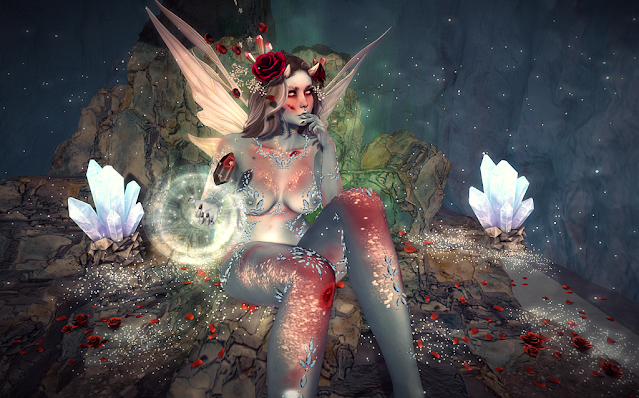 For some reason, the dark little fae in me won this round. She's sitting in her dark cave, thinking, plotting and wondering what the waltz would entail. Did she even remember how to dance?!
She loves being surrounded by pretties, the way that the crystals twinkle in the dark and the scent of the roses that she trails as she moves... Her Frozen skin - from Wyrd - sparkles along with the crystals and the Skathi's Kiss wounds - a release from The Rotting Lab for Aenigma - and the Frostbitten Gems - from Static - dazzle and blind...

What is she wearing;

Posted by Rudhmellowen at 8:31 PM