The Circus arrives without warning.
No Announcements precede it...
It is simply there, when yesterday it was not!
The sign on the gate reads 'Le Cirque Des Reves', Opens at Nightfall, Closes at Dawn.

As dawn arrives, Rudhmellowen stumbles through the gates. Her mind filled with the wondrous things she has seen... So many sights, so many smells, the magic to be found around every corner. When the circus arrived, people began to whisper about the strangeness of a cirque appearing without warning. Yet as they passed through the gates these rumours slipped from their minds, replaced by awe and happiness...
Who were the masters, the creators, the imaginators of this feast for the mind... How was it all even possible?
Rudh had to go back, she had to see more... But how long would the Cirque Des Reves - The Circus of Dreams - be reality, something more than a legend amongst the people of the town? 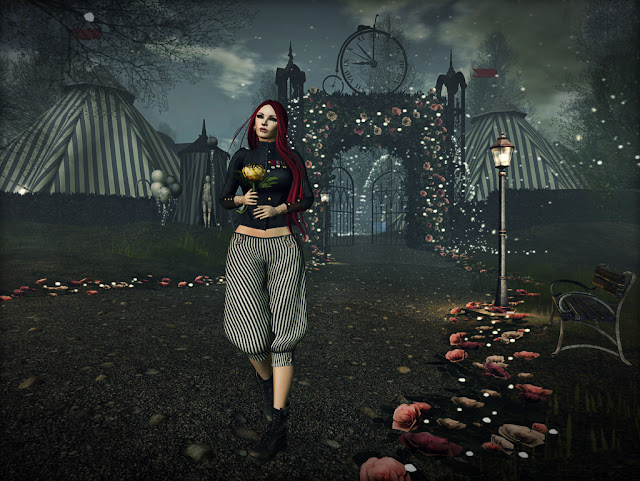 OK Back to reality a little, I mentioned yesterday whilst talking about Elysion's location that is LUNA, of a place opening by the design team that I was REALLY excited about. Last night, Syn Beresford and her team, held the magical parties at Le Cirque Des Reves...
I GOT SO EXCITED!!! I wasn't able to make it to the party due to time and a crappy PC, but this morning when I woke up I couldn't get there fast enough, and it was SO PRETTY. The location, and event theme, is based on one favourite books that I've read in recent years, called "The Night Circus" - by Erin Mortgernstern - and it's a vintage story with some romance and mystery mixed into a great deal of magic. If you love reading it's one that I'd really recommend, and as the latest location creation from Elysion's team would suggest, it seems I'm not the only one!
Now I'm not going to ramble on about my outfit, the only thing I will say is that you NEED to be in Monochrome to be allowed here. It's part of the story and theme of the location, but trust me it's well worth the visit... Thank you Syn for bringing this story to life
Go now, you never know when Le Cirque Des Reves will move on from here, just as it appears. One day it's there the next it's gone without a trace!