L.U.N.A, the Story of Humankind

One of my favourite places to go and explore, a pretty location for taking pictures and generally relaxing is a place called Elysion. This location is a paid entry group, but since I've been gifted with the group access I have really enjoyed going back to visit time and time again. Not only the main location, but the little sometime locations that spring up for a short while are amazing... I know there is one opening today about a certain book I was crazy about, I will be going to visit the location hopefully soon before it closes, but today I want to talk about one of the sometime locations...
L.U.N.A, the story of Human Kind... 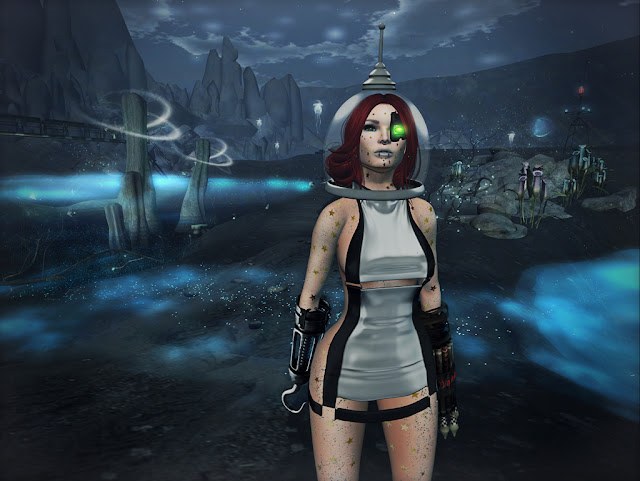 "Humankind is responsible for destroying the planet known only a few decades ago as Earth.  They of course were warned, and chose to ignore. Even after all the signs….the raging fires, floods, earthquakes, and tropical storms so intense they were capable of wiping out  infrastructure for months at a time, and widespread devastation to a multitude of planet life.
The year is 2024--a privately funded team of scientific experts, botanists, and astronauts has been assigned with the task of taking selected specimens from earth in an attempt to colonize the planet known to us only as - L U N A -.
Luna is the last hope for the survival of the human race. We have no idea if this mission will be successful, but what is left of humankind hinges on the success of  the colonization of this new planet."
Taken from their release notes, this location I will admit did scare me a little bit at first. I'm TERRIFIED of Aliens. Yet I HAD to see what it was about... It's so gorgeous, more than a little worth the trip in to visit. It was a gorgeously, serene, and yes eerie all at once.
Of course, I had to get dressed up, it wasn't just going to be normal looking astronaut either... It was a Rudhified, would actually never survive if she wore it in Space!