House Mascots for the Games!

I am really on a roll at the moment, playing with silly things that are so different from one day to the next... Today I'm going in a totally different direction from yesterday's naughty post, I'm doing something really silly, and I LOVE IT!!
Very Soon, the Winter Olympics will start - February 9th I believe - and so the world seems to be going sports crazy. I'm not really a sports person, I don't mind playing certain things, and I was a real Rugby fan when I was younger, but now I would rather read a book than watch sports.
The Liaison Collaborative this month though, seems to be gearing up for the upcoming games, and all of it's designers are getting into the swing of things... Sporting fever even seems to have reached Hogwarts! 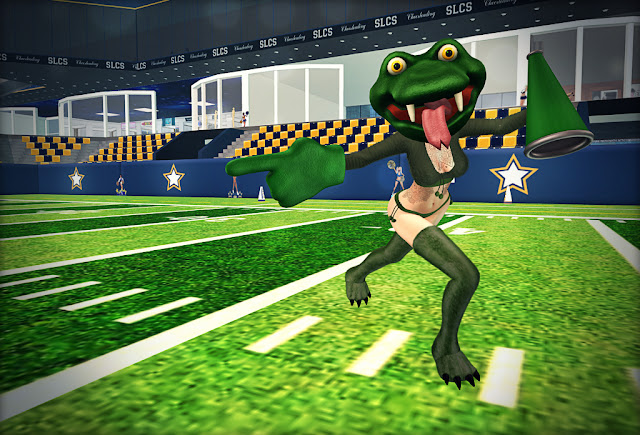 I know that Harry Potter's characters probably don't really think much about the Olympics, but they are into their sport of Quidditch. I made the mistake of asking my RL sister about Quidditch, and realised too late that it's a lot like a football fan talking about the off-side rule, it sounds like waffle! I smiled and nodded, then ended the call a little fast!
It's the fault of Lost Junction - at this month's round of The Liaison Collaborative - as they have dusted off some awesome mascot sets for each of the Hogwarts Houses. You may have realised by now that I'd be a Slytherin, as I've mentioned it before, but each house is represented - Snake, Lion,. Badger and Crow?!
Now I wasn't allowed on a Quidditch Pitch for safety reasons, because frankly I doubt I'd survive... So I was lucky to be allowed access onto the field at the well-known Second Life Cheerleading Squad field. These ladies are very friendly, and pack a lot of pep into any event that they attend so maybe you'd want to see them for yourself, or even become one of the SLCS girls?! Check them out, along with their impressive Srooc Skytower Memorial Stadium.
While on the subject of sports though I have to mention the pose I'm doing as a mascot... It's from a set of poses also released at The Liaison Collaborative, by NANTRA, called Going for Gold. Now as I've shown, by adding the store ad below, these are ice skating poses, but they looked perfect as my mascot was diving all over the place getting the crowd excited, and I love the fact that these poses are able to be used for all kinds of things!!! 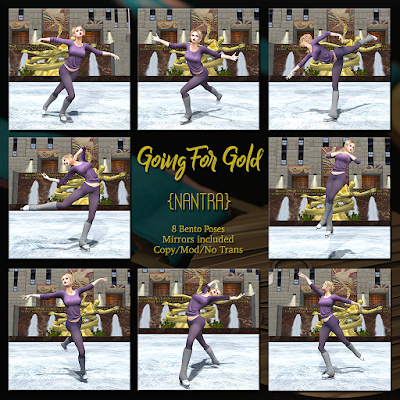