F is for FAIRYTALE!! - Alphabet Time

My SL has been and will probably continue to always be a bit of a Fairytale. Since my early days in SL, I have had a family here that are not only some of the people I have been closest to in the last five years, but they are also some of the most creative, imaginative and honest people I've ever met. The family is lead by Queen Fledhyris, a golden dragon with a penchant for hoarding shiny things (or anything for that matter) and a flair for dressing in the most beautiful and exotic outfits when in human form! The rest of this family rabble is made up of dragons, furries, witches and werewolves, with the odd Hogwarts wizard thrown in for good measure. I started my SL as a Fairy, dressing in the pretty floaty dresses and wings. Later, and before all the bloodlines started up, I was bitten by a Vampiric Pama and ended up heading from the lightness of the Fairy realm to the darkness of Vampire blood. That was until I finally managed to subdue both forces and become the barbie skank that I am now... Very occasionally one of these feelings come to the surface, this letter was one of those times!
FFFFFFFFFFFFFFFFFFFFFFFFFFFFF 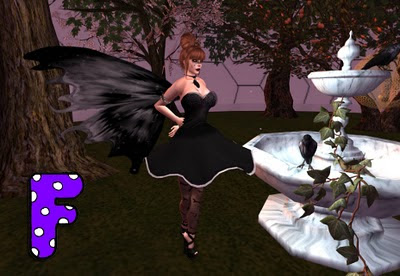 What F's did I dig outta my wardrobe;

Hair: FRI.DAY - Tatum
Skin: {FRICK} - Autumn's Fell (store closed *pouts*)
Necklace: Magika - FEATHER NECKLACE
Tattoo: Kosh - FLOCK OF BIRDS TATTOO
Bracelets: .:*LouLou&Co*:. - FALL BRACELETS
Outfit (including Wings): ..::Beauty Killer::.. - FAIRY GOTHMOTHER
Leggings: { birdy.} - FLY AWAY LEGGINGS (store now closed)
Shoes: FLAX PYE - Amsterdam
The place in the photo is Fledge's Floating Island. This is like a second home to me, and it is a place that I will often retreat too if I need to get away from home. The island decor changes for the season, and sometimes if she just wants a new look too I guess, but it is always pretty, and always fairly natural. The perfect place for a dragon to call home, floating in the clouds!
Posted by Rudhmellowen at 11:32 PM