The Gators MC... My SL family... Yes we are a Motorcycle Club - one of million, it seems, in the SL world - but from what I know of these other places, we seem different, more than just your average MC... We are a truly tight-knit family... 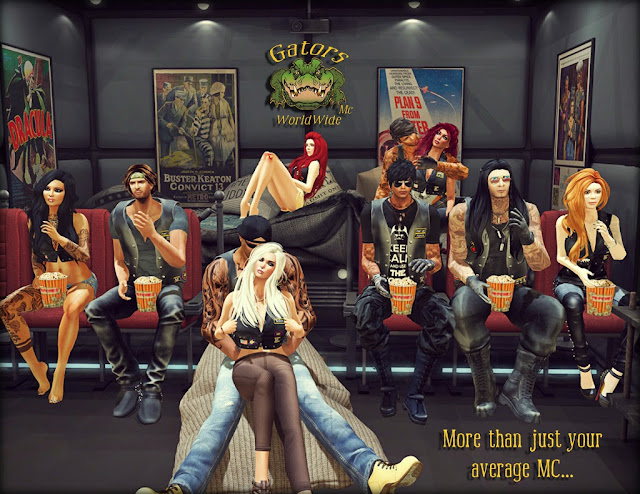 So when it came to time for a new family photograph I decided that I wanted to do something a little different. In the past and in so many other MC member photos, you see posed - almost staid - photographs where people look a little uncomfortable! I wanted to do something that showed off the familiar bond between each of the members in the group.
This isn't the entire group, some people were missing due to RL commitments, but it gives you a definite idea of our family dynamic... Chilling out, the couples being couply - with the exception of Hell and I because well he is better off with his "son" while I try to avoid my Mum Kara's amourous display with MeGa lol...
I will say that you're lucky you didn't hear the conversation topic while the photo was being taken... This time it was a debate over were we watching Star Wars - Ath and Hell's choice - or was it Finding Nemo - which to be honest, at least it wasn't Frozen LOL...
Still, the pose prop itself was the brand new Movie Night Skybox from Consignment, which you can grab for yourself at Uber. I did have to add an extra pillow, in the form of this Brown Lounge Pillow from [we're CLOSED], but that's only because I had one too many butts hehe... The Skybox happily seats 9 people!
Still I really love the idea of this photo, a crazy group hanging out in a cute setting watching movies, that sums the Gators MC up pretty well most of the time, and so I say this here because I am cheeky like that... If you are looking for an MC, and want to check us out, there are two great ways... First check the Gators MC Blog, or the Second and BETTER option, come meet us at our Home!!!


What are they wearing;
(To find out about individual looks, if you want to know PLEASE ask me... I would have a nightmare listing everything LOL)
Pose Prop: Consignment - Movie Night Sky Box (Available Now at Uber)
Bean Bag: [we're CLOSED] - Lounge Pillow in Brown (Past Cosmopolitan Release)
Posted by Rudhmellowen at 10:12 AM